Halloween Light Show...and I'm going to get me one!

How do people do this?! It's insanely wonderful! I wonder how long it took to design, install, test, coordinate, manipulate, gesticulate, pontificate, deliberate...this light show?

Jason, dear husband:  I expect something like this on our house for Christmas. Maybe some talking Santas, dancing Reindeer, some Snowmen back-up singers. Nothing too elaborate, just a little something to draw traffic and mayhem in our neighborhood...and an extreme electric bill.

So Honey, if you're going to do this little something for me, you had better start yesterday, 'cause this is incredibly spooktacular!

A beautiful song...nothing could be sweeter than little children singing a song of "thanks."

The words are heartfelt, the music is so traditional and simple.

hatched by It's A Wonderful at Thursday, October 27, 2011 No comments:

profile of a doper.

The injury happened Wednesday morning. She insisted on going outside at 5 AM.  The morning 5 AM. We were sound asleep. OK, I was soundly sleeping, it was Jason who got out of bed to let her out. My sleep wasn't disturbed; never is, never has been and never will be.

BB stayed outside for several hours until I let her back in, just prior to leaving for work. I opened the door, she came in and laid down in front of the sliding doors... it's important that she can keep an eye on what's happening in her backyard as she waits for the sun to rise, that her sunbathing may commence.

It's tiring getting up that early to chase squirrels, owls and marking territory...a girl's gotta get her beauty sleep!

Call me an unfit mother, but I simply didn't notice her limping and favoring her paw. How would I? I open the door, she comes in and then plops right down in front of it. But I did notice her limping when I arrived home later in the afternoon. She was licking her paw.And licking. And licking. Did I mention she was licking her paw? And not that this has anything to do with her injury, but why does she lick the floors? Does anybody know why a canine would do that?!

It just so happend that the next day, BB had an appointment with the vet.The vet took a look at the paw and diagnosed a probable nail problem or bruise...

Then sent us home with some kind of fabulous medicine, to help BB "relax" during her injury. 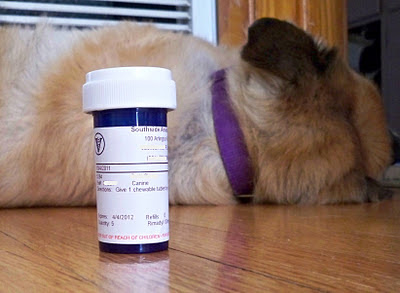 Our doggie got stoned!

I mean, really STONED! She didn't move a muscle. 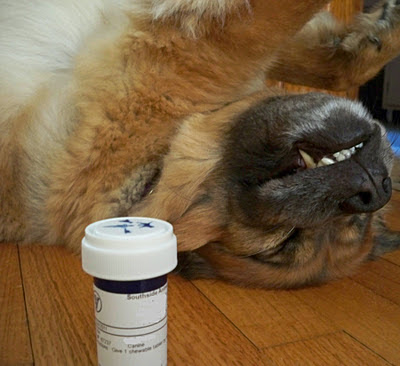 What a lovely profile, BB! The fang angle is outstanding.

This stuff made her stone-cold stoned. We call it...Doggie Dope.

She didn't have a clue as to what was going on.

And really, wouldn't it be nice to once-in-awhile be able to just sack out like this on the floor and not have a clue or care in the world as to what's going on around you?

We'll never know what was going on in that little head of hers.

But I can tell you one thing...her paw wasn't hurting anymore! 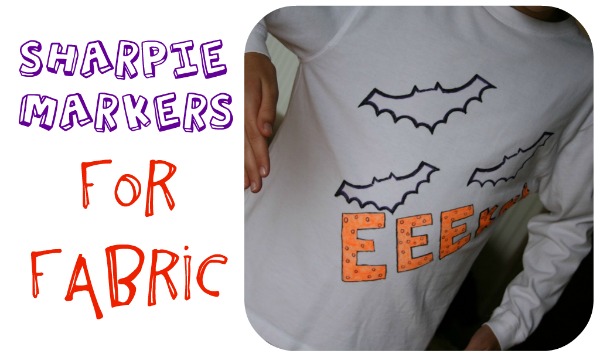 What?! Sharpies for fabric?

Brilliant! I can't wait to get my hands on these...totally revolutionary!

Today's Creative Blog is sponsoring a giveaway for one lucky reader to win some loot from Sharpie. Click here to enter!
And while you're there, check out the rest of her blog. You'll find recipes, decorating ideas, fun giveaways and crafty goodness there!

Go. Get creative and if you win those Sharpies, I'm gonna cry...but I'll be happy for you. Sad for me. Happy for you!